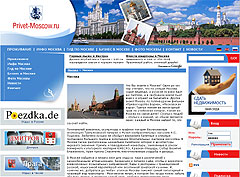 Moscow is an important city, which is usually bracketed with Paris, New York, London and Rome. Portal about Moscow - www.privet-moscow.com - was created as a city resource with an extended set of functions. Previous websites about the cities of the CEE in the group of online guides were primarily informative. www.privet-moscow.com, which is based on the improved CMS by Principal Solutions, in addition to a wide variety of information offers several interactive functions, including an additional catalog of companies and a directory of hotels based on imported XML data.

The structure f the portal about Moscow contains several categories:

Also there is another standard option at the website – a news block about Moscow. An additional option at www.privet-moscow.com – is ability to upload photos of Moscow in the gallery, and customize individual pages with descriptions for pictures and, if desired, set price for them. Business in Moscow category is created for those users of the portal who want to add information about their companies to the website.

Today Moscow for tourists is a huge set of unique historical monuments, museums, temples and ancient buildings. Despite the fact that in recent years, that an active construction of new business buildings has greatly reduced the historical center of Moscow, it is still possible to see many sight there. Moscow – is a city with an eventful night life. Restaurant business in Moscow has become one of the most luxurious on the European continent long ago, due to the diversity of represented cuisines and the highest qualification of cooks. Dozens and hundreds of various industry exhibitions are held here annually, many of which have become the most important events for a particular industry.

Portal about Moscow is an extension of Principal Solutions’ strategy for developing of the network of online guides to the countries and cities of Central and Eastern Europe. The foundation of the network was laid in 2004. At that time the first website telling its visitors about recreation in Russia and CIS countries became the German project poezdka.de. www.privet-moscow.com is a news project, which has three language versions now: English, German and Russian. Please, direct your questions about the work of the portal to the following e-mail address: news@privet-moscow.com.