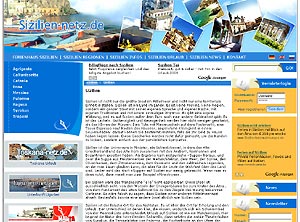 The project about recreation in Sicily en.sizilien-netz.de started in November 2007. It supplemented the group of resources about recreation in Italy, which Includes websites about Liguria, Tuscany and Venice. With the help of en.sizilien-netz.de you can easily book a villa or apartment in Sicily, as well as much useful information about the region and its resources.

One of the main components of the project has become a database of holiday homes in Sicily. Sicily is divided into 9 provinces according to administrative principle:

Almost the same principle is maintained in the representation of villas, cottages, apartments and hotels in Sicily. For each province there is a separate topic. Lipari Islands, which belong to the province of Palermo, but they are an autonomous resort, are selected into the separate section. The catalog contains hundreds of accommodation options, where hotels in Sicily, as well as holiday homes and apartments are represented.
Holidays in Sicily

Sicily is an island that is popular among tourists due to its nature and architectural attractions. Many relics of Ancient Rome and Ancient Greece has remained here: The Valley of the Temples in Agrigento, Syracuse, Segesta and Selinunte. The most famous resorts of Sicily are: Cefalù, Kastellamare del Golfo, Taormina, as well as Lipari islands off the northwest coast of Sicily, Aegadian Islands off the western and Pelagie Islands off the southern coast. The symbol of Sicily is Etna volcano, the largest one in Europe. At the foot of Etna a number of small resorts is located, as well as some of the best in Italian vineyards. The holiday season in Sicily begins in April. Summer on the island is hot and sunny. The hottest month is August, when temperature rises up to 40 degrees and above. Popular ways of recreation on the island: diving, yacht tours along the coast, gourmet tours to the provinces of Sicily, wine tours, tours to Etna, spa vacation.